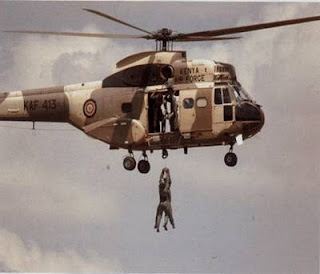 Who is more important? Security Forces secret communication or your mobile internet experience? This is not a theoretical question, it is one that the Communications Commission of Kenya will have to confront soon.

It is emerging that the next step in mobile communication technology, the so-called 4G or Long Term Evolution LTE faces a major hurdle in Kenya. The frequencies at which 4G operates, 2.4GHz - 2.6GHz, are held by Kenya's Armed Forces.

Now that is a problem!

So although Huawei Technologies are ready to deploy the technology for their client Safaricom, they cannot because the frequencies are not available.

I don't see the Army just giving up its frequencies and I wouldn't even want to imagine how much of is tied to these frequencies much in the same way most handsets are only second generation and cannot work with say 3G.

You see, mobile technology is now at what we call third generation 3G stage in Kenya -Safaricom has 3G, Telkom and Zain are rolling it out.

Previously, we were at 1G Analog, then we moved to 2G digital (voice, SMS) where most Kenyans are today. The bulk of mobile phone subscribers have 2G handsets and only now are more and more people on 3G (Multi Media, video etc) enabled handsets.

But there is talk of moving to the next stage, 4G where speeds are seen to be truly blazing.

Which is why the Communications Commission of Kenya needs to step up and reorganize spectrum management in the country.

For example, Safaricom because of the current situation where Armed Forces occupy the frequencies which should be used for 4G had said they would consider using the 2G space to deploy this superior technology.

But the bulk of their subscribers have 2G handsets so they can't do away with 2G or risk cutting them off and it will be sometime before majority of handset makers have affordable 3G handsets.

The situation is further compounded by the fact that the space within our Radio Frequencies that mobile operators have been allocated are similar in size. But Safaricom has 14million subscribers while others have a combined total of less than 5million.

So congestion is all too likely to be an issue. CCK however, needs to come out boldly and say what it is doing about the Spectrum issue and not be a hindrance to development of technology.
Posted by SCRIBE INTERNATIONAL at 5:47 AM