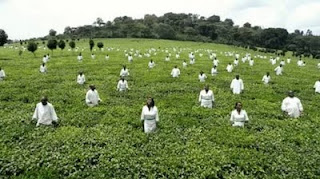 Tech stuff happening here and there.....

Safaricom is already in its 2.0 phase and Bob Collymore is in New York for the Africa Investor Conference...he will be back there next month on an investor road trip when he and maybe Les Baillie will meet the likes of Morgan Stanley and other investment banks and hedge funds that invest in Safaricom.

Anyway, the main news is that Safaricom could be seriously considering entering the TV arena.

I posted here that Airtel is considering bring its Digital TV to Kenya to take on Naspers Group owned DsTV.

As we migrate from Analog to Digital TV the game will change of course because Multi-Choice, the Naspers subsidiary that runs DsTV will also be looking to enter the terrestrial TV transmission field. As we speak, the company is looking for a suitable name as DsTV denotes satellite transmission.

Airtel has said it will offer a cheaper content to compete with Multi-Choice's two content generators; Entertainment Media Network (MNET) and Supersport but given that we are still waiting for them to roll out 3G, that might be ambitious.

Enter Safaricom. Details are scanty but it all has to do with data and content which Safaricom wants to parlay into profits much in the same way it did with voice in its first decade.

What seems likely for now is that like media owners, Safaricom will apply for a digital channel and probably partner with one of two digital signal distributors, Signet a KBC subsidiary and another yet to be named licensee.

Digital TV is not just in Safaricom's interest to invest in, it is also a potentially dangerous opponent in the data field for one reason.

The technology we will adopt for digital TV (DVB-T2 or digital video broadcast generation 2) converts each frequency into 18 digital channels.

However, some of those channels, I believe they are two, are reserved for data transmission/internet.

With a TV set in almost every urban household these days, and the mandatory migration to DVB-T2, it means then that the perennial and vexing question of how to economically bridge the last mile to households will have been solved in one fell swoop.

Should another content provider/ISP seek to exploit this channel, they could be in every household and become the preferred internet service provider.

And then Safaricom 2.0 could become derailed.
Posted by SCRIBE INTERNATIONAL at 12:44 AM No comments: