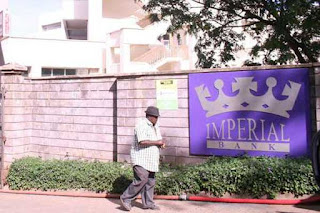 Local lender Imperial Bank has been taken over by the Kenya Deposits Insurance Company on orders of the Central Bank of Kenya on concerns that it was conducting unsound business practices.

Sources indicate that the takeover was ordered allegedly after fraud was discovered and the bank sought CBK protection.

CBK is itself yet to give credence to the claim.

But sources indicate that evidence of parallel banking operations being ran within the bank were discovered as the bank sought went through a succession process in its top management.

CBK in its statement said the bank was being taken over and its operations ran by KDIC to the exclusion of the board of directors with KDIC instructed to report back to the regulator on its considered advice for resolving the problem within the next 12 months.

The bank which was founded in 1992 operates in Kenya and Uganda and has 17 branches.

The shocking development comes against the backdrop of the death of the bank's MD Janmohammed on September 15, 2015 of a reported heart attack.

It also comes at a time when the economy is experienced a cash crunch suggesting that the lender was perhaps experiencing problems meeting its obligations as and when they became due.

The bank lent other banks money as recently as yesterday before today's announcement.

During a similar period in Nigeria during the global economic meltdown and accompanying financial crisis, the governor of the Central Bank of Nigeria, Lamido Sanusi, sacked the bosses of five banks after he realized they were permanently borrowing from the CBN's discount window meaning they were borrowing to meet daily obligations.

Currently, the CBK in Kenya has effectively locked the discount window forcing the banking industry to either borrow within itself or unwind from the holdings of government debt it has.

CBK said it was ordering the takeover of Imperial Bank in the interest of debtors, creditors and members of the public.
Posted by SCRIBE INTERNATIONAL at 12:30 AM 2 comments:

GT Bank said it expects to scale up uptake of its Platinum MasterCard Credit card that it introduced into the Kenyan market in June.

EMP handles payments processing for over 140 banks on the continent and in the Middle East.
Posted by SCRIBE INTERNATIONAL at 8:53 AM No comments: