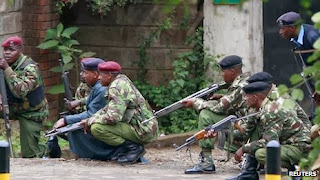 National Intelligence Service (NIS) agents have asked mobile network operators Safaricom and Airtel to provide details of incoming and outgoing calls from the Westgate Mall at the time of the attack on shoppers by armed militants said to be Shabab.

This is another development that illuminates the number of areas security agencies need to incorporate in their national security plans.

Safaricom technicians say the information is gleaned from the four masts nearest to the Mall and of the data provided to the NIS agents, a lot of it involved international calls incoming most likely from relatives of those who were caught up in the mall during the attacks.

They added that had the authorities alerted them, they could have told them the closest they can provide information to real time is with a delay of 30 minutes.

But it is also possible to isolate all Mobile Outgoing Calls from Westgate that terminated in say Eastleigh or any other location in Kenya.

That would certainly be the tactic that NIS would seek to apply to try and narrow down to the suspected Shabab terrorists in case they were using mobile phones to communicate.

If they have credible leads then from there what they would seek to do is to establish pattern and networks.

This means they will go back to Safaricom and Airtel and get the call logs for those numbers they suspect were used by the terrorists.

Anyone who called them, and how often, and anyone they called and how often would also be snared into the dragnet so as to establish other liaisons as well as to nab high-worth suspects that can provide high-grade actionable information.

So expect a wave of arrests in the next two months or so.
Posted by SCRIBE INTERNATIONAL at 4:33 AM 1 comment: 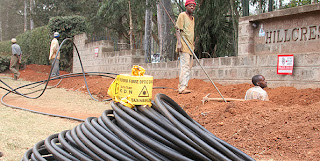 Safaricom is digging up the city of Nairobi and along major highways as it lays 12,000 KM of fiber optic cable, 6000KM in Nairobi alone.

Contrary to what many people may think, Telkom Orange, KDN and Jamii Telecom are not the targets, AccessKenya is.

AK, recently the target of acquisition by Dimension Data, has spent about half a billion shillings to put up close to 400Km of cable in Nairobi and Mombasa.

But the sheer scale of Safaricom's effort dwarfs this and makes the case that perhaps it is the right time for the Somen's to sell.

Safaricom is not just overwhelming Access with the size and reach of its network, it also plans to hunt it in packs - of dealers.

Safaricom will not sell the fiber directly to neighbourhoods or households, it will first and foremost be a carrier of carriers.

In other words, it will lease the capacity to others for onward selling to customers. By putting many players in this field, it saves itself the cost of putting up costly sales infrastructure and fosters fierce competition against the likes of AccessKenya who will have to contend with different players selling Safaricom broadband in different parts of Nairobi, Mombasa and everywhere else they may operate.

While Safaricom says it will work with Telkom Orange to provide complementarity, it seems pretty clear, funds allowing, it intends to roll out county infrastructure to serve each county.

It is another step in the astonishing growth and total dominance of Safaricom in telecommunications, and one which inevitably will eventually see the breakup of the company by the government considering it is unmatched in another fast growing category Mobile Finance, and is still controls 70 per cent of the voice market.

Access meanwhile, will need to re strategize and chart out its future. If Dimension could have made a play for KDN's infrastructure and combine it with AccessKenya's metro infrastructure, they may have had a chance.

KDN was however taken over by Liquid Telecom which has a pan-African fiber network operation and recently opened what it called East Africa's largest Data Center.

If not, its curtains.
Posted by SCRIBE INTERNATIONAL at 5:52 AM 1 comment: