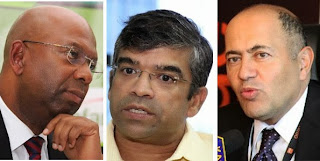 There comes a time, when even as a CEO of a major corporation, you realize that in the scheme of things, you are just another citizen to the government.

That was the it moment for telecom operators earlier this week when government decided to crack down on their CEOs for failing to register SIM cards within their network.

After what seemed a harmless threat by the Cabinet Secretary for Information that Telcos CEOs would be held criminally liable for unregistered SIM cards on their networks, CID officers were dispatched to collect them from their premises.

As CEOs frantically paced back and forth trying to figure out what was going on, it became apparent that CID officers would pounce on them once they came out and march them to the nearest police station.

Telkom Orange CEO Mickael Ghossein was the first to record his statement on Monday and later went back on Tuesday.

Shivan Bhargava of Airtel had to play hide and seek with the CID officers and eventually made it out of Parkside Towers through the Fire Escape and the basement.

Madhur Taneja appeared to be spared.

Airtel and yu are the worst offenders, a person with familiarity of the situation said.

Indeed, Airtel was said to have about 600,000 unregistered SIM cards as well as those that were registered with false ID numbers.

Safaricom because of its M-PESA network had relatively much fewer but still had SIM card numbers being activated without registration.

A press conference by the four CEOs on Tuesday had to be rescheduled for 12:30 PM to allow technicians time to purge the offending numbers so that the telcos would demonstrate that they were compliant.

This they largely managed to do as the situation was drastically different from the day before when they were first summoned. Many unregistered numbers had disappeared as technicians spent the whole night working the systems.

Their indignation at their treatment was however misdirected as they blamed CCK.

Few took time to reflect on the fact that at the time of the ICC cases, they were able to provide prosecutors with the call records of key government figures during that time including who they called, who called them and so on.

When asked to provide call records for the Westgate terrorists, they did not have them.

Observing the mood of the CID officers sent to the telcos offices, staff said the order had to have come from the very top.

Meanwhile, faced with the prospect of revenue losses from switching off unregistered SIMs, some of the telcos have now begun reaching out to the owners of those numbers asking them to update their details.


Posted by SCRIBE INTERNATIONAL at 5:03 AM